FREE EARRINGS WITH PURCHASE OVER $1,000 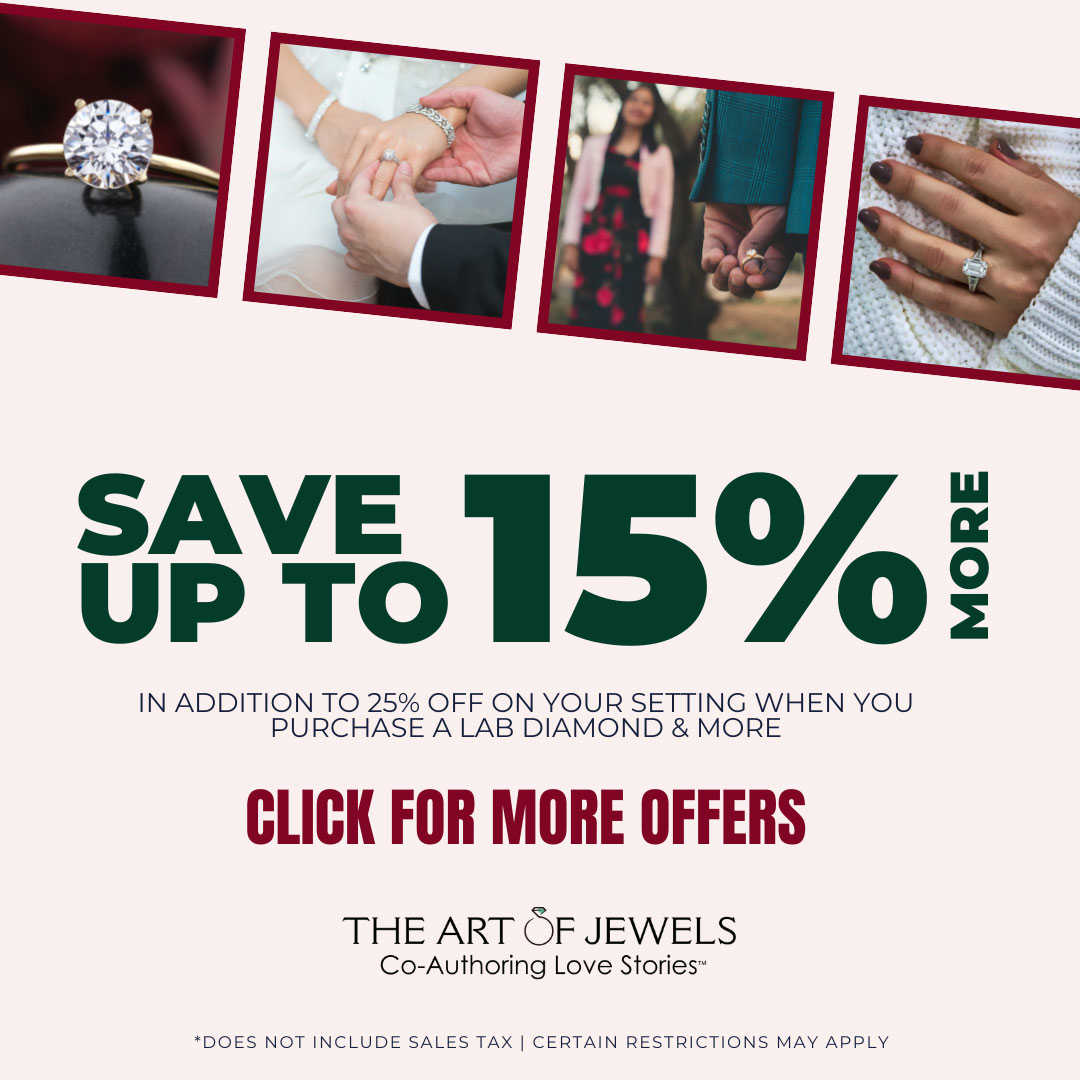 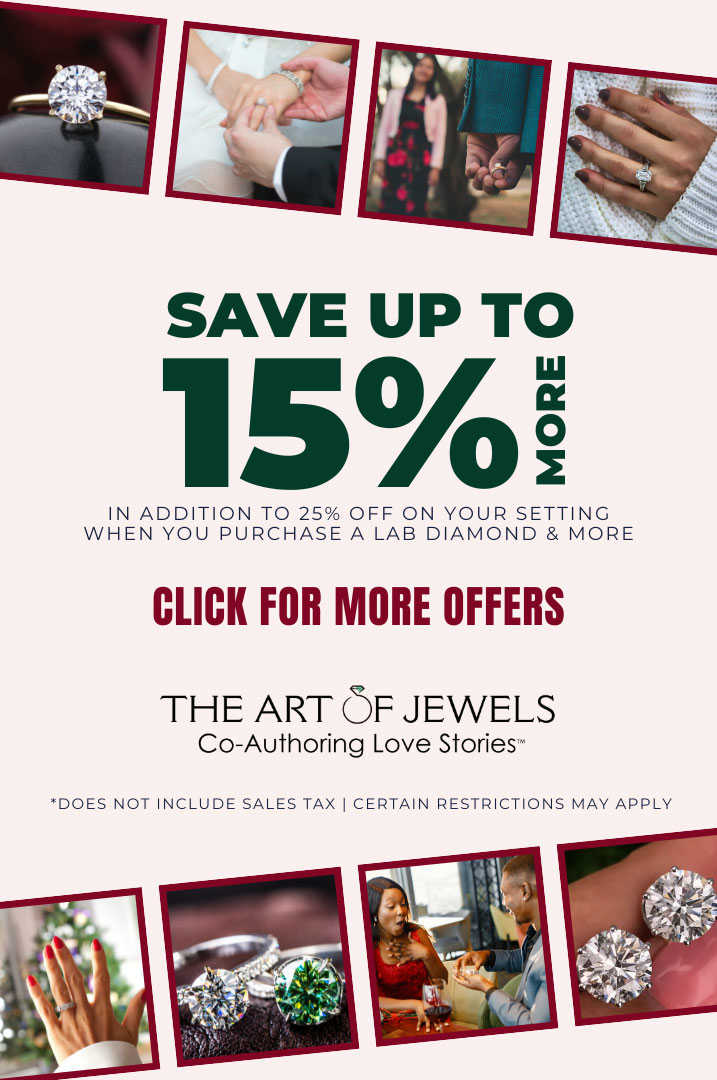 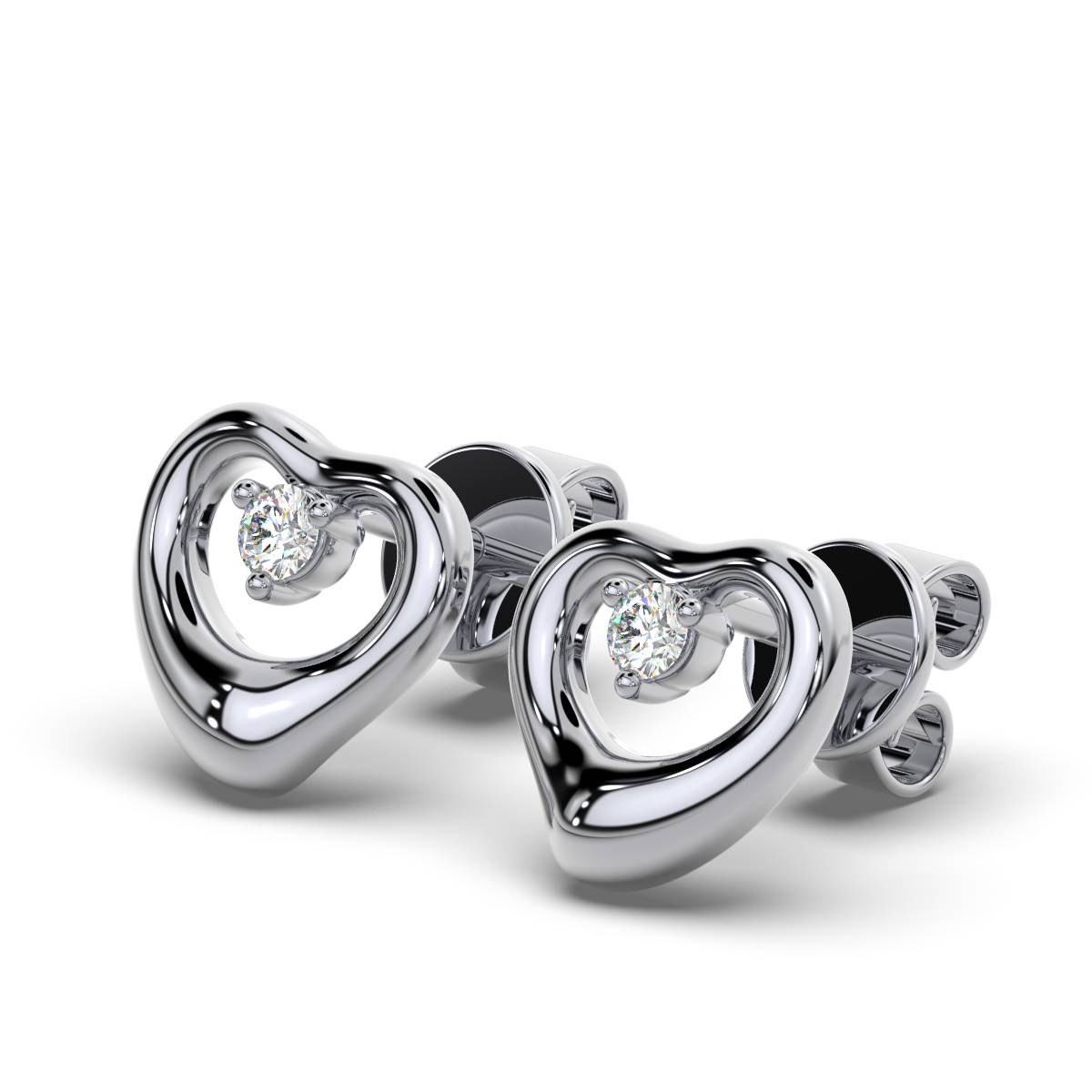 Having discussed diamond color in the 6C's section, we explained that a colorless diamond is the most desirable. This statement is absolutely true when limiting our discussion to white diamonds, but it is important to understand that diamonds do occur in many colors.

The general consensus is that the closer a diamond is to being colorless the more valuable it is. The exception to this is those diamonds that are "Fancy Colors". They may range from vibrant yellows (canary), browns (cognac), blues, greens, oranges, violets, and pinks to the rare red diamond.

The various colors are influenced by the presence of trace mineral elements in the carbon structure of the diamond. Aluminum induces the blue color, manganese attributes for the pink color and traces of nitrogen account for yellow color.

Color Enhancement
Irradiation of a diamond at the lower end of the color grading scale, is a post World War II diamond treatment that may provide a color change equivalent to that of a fancy yellow or fancy green color. Although these enhanced color diamonds may appear as beautiful as their natural color diamond counterparts, their pricing is less than a natural color diamond and the irradiated treatment must be disclosed.

Clarity Enhancement
One method of enhancing the clarity of a diamond involves filling fractures with substances that match the optical properties of a diamond. Yehuda diamonds are fractured filled diamonds and should be disclosed as such. Fracture filling is not a permanent enhancement treatment (fill material may be affected by exposure to heat) and cannot be accurately clarity graded.

Laser Drilling
Laser drilling may change a dark inclusion to a less visible inclusion (to the unaided eye). Laser treatment is considered a permanent treatment and an accepted practice in the jewelry industry, without affecting the clarity grading or diamond brilliance.

Cutting a Diamond: The stages of a diamond

A diamonds' origin begins deep within the earth's crust. A combination of gases, liquids and semi-molten rock known as Magma is transported via volcanic eruptions from the earth's mantle to regions below the surface of the earth. This Magma, "Kimberlite", is subjected to intense heat and pressure becoming the transparent form of pure carbon known as Diamond, a natural crystalline mineral. Diamonds may remain buried for thousands to millions of years before being excavated or they may be released through the process of erosion and can accumulate, forming alluvial deposits.

You may be surprised to learn that an incredible amount of ore, as much as 500,000 pounds, is mined and sorted to produce a single one-carat stone. Also of interest may be the fact that only one of one thousand diamonds weighs in at more than a carat in weight.

Although diamonds were first mined in India about 4000 years ago, today some 80% of the world's diamond rough production occurs primarily in Australia, which has become the largest diamond-producing nation in the world. Other diamond-producers include the Congo, Botswana, Russia, South Africa, Angolia, Nambia, Australia and Zaire.

Diamond mining is a labor intensive, complex process involving the skill and expertise of countless individuals.

The underground mining process requires the dynamiting of sections of diamond bearing ore into small pieces. These pieces of ore are then gathered up and dumped into railway cars that travel the mine's access tunnels to the cruncher. The cruncher breaks up the ore into yet smaller pieces resembling gravel in preparation for later steps in the diamond recovery process. This gravel-like material is next poured into another machine called a churning tank, where the diamonds, because of their high density, sink to the bottom along with some of the heavier gravel. This material is finally moved onto conveyor belts, which carries it to the grease table.

Recovery:
The grease table vibrates the diamonds over tiered surfaces covered in a layer of grease a half an inch thick. The diamonds stick to the greased surfaces while the rest of the diamond bearing concentrate is washed away by water.

The diamonds that have adhered to the table surface are scraped away with the coating of grease and placed in large kettles of boiling water. The boiling process melts away the grease and only clean diamonds remain.

Alluvial deposits:
Field and strip mining require a different recovery approach than that utilized in underground mining. Here, the diamonds lay in ledges buried beneath the windblown sands. This material must first be stripped off and hauled away before the terraces can be screened for diamonds. An optical separator is employed to detect any reflected light, indicating the presence of diamonds, in the diamond bearing gravel. The diamond bearing gravel is then separated from the non-diamond bearing gravel, treated for separation, and placed on a grease table. The grease table process for separating alluvial recovered diamonds differs from those used for diamonds mined under ground but the end result is the same.

Sorting:
The final step in the recovery process is the sorting of the raw diamonds. Machinery has carried out the process until this stage. The sorting stage relies upon the skill and judgment of trained individuals to separate gem quality stones, suitable for cutting and polishing, from those that are of an industrial grade. Recovered diamonds are first sorted into either gem or industrial grades, and then sorted by size and color. The gem quality material is prepared for shipment to buyers, known as site holders, who have acquired the approval of De Beers, these buyers are known as site holders. This is the first stage of the diamond selling process as the diamond(s) make their way to a finished piece of jewelry.

Marking:
The marking of a diamond is the first procedure performed in preparation for planning what shape the diamond rough is to eventually become as a finished stone. It determines where the rough is to be cleaved or sawed. Today, modern flaw detecting devices and modern diamond cutting techniques are employed to aid in marking process

Cleaving/Sawing:
Not all diamond rough needs to be cleaved or sawed. Some diamond rough is well formed and can be considered ready to cut. After close examination of the diamond rough through a 10X (power) loupe to decide how the rough is to be cut, it is marked using India ink to indicate the exact cleaving or sawing line. After identifying the natural grain of the diamond, a diamond pointed tool called a "sharp" is utilized to groove the diamond rough. Into this groove the cleaving knife is precisely placed and struck with a sharp blow splitting the diamond along its cleaving plane. Any small diamond fragments that may occur during the process are collected in a box placed beneath the stone.

The sawing procedure was developed in Antwerp in the 1900's. Sawing a diamond across its grain is considered less dangerous and more economical than cleaving as a way to separate the diamond rough. The diamond saw is basically a paper-thin, diamond impregnated disc positioned on a high-speed motor (rather like a table saw). It can take up to a full day to cut a diamond rough equivalent to a one carat diamond. Both parts of the diamond rough will be cut into a finished diamond.

Blocking:
The blocking, rounding off, or girdling of the diamond rough is the next step in cutting the diamond. This procedure is performed only for diamonds that are to be finished as round, brilliant stones (fancy shaped stone require a different type of preparation).The sawed part of the diamond rough is attached to a spindle-like device that is fitted onto a lathe. As the diamond spins at a high speed, the blocker uses another diamond held against the mounted rough to fashion a perfectly round stone at its diameter, or girdle. The blocker's next responsibility is to place 8 bezel facets on the top of the diamond, around the large flat central table facet, and 8 facets on the conical shaped bottom, or pavilion, of the stone. When finished, the blocker has placed 17 single facets at precise angles on the diamond.

Polishing:
Polishing is the final stage of the diamond cutting process. The shaped rough is set into a diamond polishing tool that holds it against a flat, revolving disk that has been coated with a mixture of oils and diamond dust. This procedure produces the flat, brilliant surfaces known as facets. The polisher will place 24 additional facets on the top of the diamond, and 16 more on the pavilion. As he rotates the stone in the holder he will constantly check to see that the precise tool angle is maintained to uphold the balance of the 58 facets that make up a round brilliant diamond.

Boiling:
Having completed the cutting and polishing of the diamond, the finished diamonds are placed in a high temperature acid bath to remove the excess cutting material that may remain. During this external dirt removal process, some internal dark inclusions may come out as well.

Sorting:
A diamond parcel may be 100 carats of mixed goods, rounds, marquise, ovals etc. of mixed color grades and cuts. Sorting the polished goods involves separating the various sizes and shapes by weight, shape, color, and cut, grouping them in qualities of like stones. Once sorted, the diamonds are evaluated for pricing based upon the parcel lot.

For example, the 100-carat parcel may have been acquired at $1000 per carat or $100,000 for the parcel of mixed sizes and qualities. This mixed parcel will contain diamonds of both higher and lower qualities in a range of sizes. Once sorted an average price per carat is calculated using the cost of the parcel plus labor to arrive at a price per carat for the now sorted goods.

Pricing the Polished Diamond:
Diamond prices reflect the costs incurred from the mine to the diamond cutters, from the cutter to the wholesalers, and from the wholesalers to the retailer. Each adds a mark-up of between 10-100%. When you purchase your diamond from Simayof you are buying directly from diamond cutters. This allows you to realize a substantial savings. Here, the additional mark-ups of middle- men are not reflected in our retail pricing, Freeing us to pass the savings on to you, the consumer.